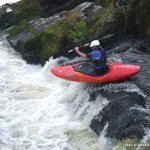 A seldom run river with continuous action from start to finish. Predominately boulder garden in nature with the odd drop and slide thrown into the mix. One of the best grade 3 runs in the country.

(Approaching from Castlebar, Co. Mayo). Drive towards the town of Newport on the R311. Pass through Newport in the direction of Achill along the N59. After about 10 mins (12km) you'll approach a river with the name plague "The Bunhowna", which is just outside the village of Mulranny. Take the right hand turn before the river and follow the road 300 metres up to a water treatment plant with a small lay-by on the left.You'll see the disused Achill railway line with an impressive bridge spanning the river on your left. You've reached the put in, and the take out!

The take out for the river is just below were you park your car. Once to pass under the railway bridge continue downstream. After the next rapid the river opens up and the take out can be seen shortly on river left. The take out is easily spotted as it is also used as a river ford by local farmers. Take out river left and walk two minutes back to your vehicle.

There is no one particular put-in for this river. From were you have parked your vehicle, start hiking upstream. There is a path for about 150 metres beyond the railway bridge on river left. This also gives ample opportunity to inspect all the rapids. We usually put on were the river flattens out after a sharp right hand turn (as your walking upstream). It's about a 20 minute hike to that point from were you parked. The river is very straight forward read and run. There are however a couple of rapids that are different in character to the rest of the river. All of these can be inspected on the hike in, with the exception of the last one which is hidden from sight beyond the railway bridge. The first notable drop is over a man made weir which is followed closely by a fun S-bed. The slight undercut on river right can catch the unwary so drive left as you go round the bend. There is a small playhole at the bottom of this rapid that might be of interest to those in a playboat or river-runner. The most notable rapid follows shortly after. It's a 40 metre slide (roughly!) with a gentle kicker at the end. This looks worse than it actually is. This slide itself is the only one of its type I know of in Ireland that is so user friendly on a river of this nature and grade. Beyond the bridge the river splits into two channels which drops and slides over a rocky ledge. Either channel is runnable. The river right channel generally provides a bit more entertainment though. A minute down stream of this is your take out.

For those that may be moving on from grade two's and easy three's it may be worth taking a minute to consider what kind of boat to bring. While not a particularly difficult run there are a lot of pin potentials due to the continuous nature of the river and bedrock so you may want to consider leaving the Crazy 88 at home. Other than that.let her rip! This one's a wee gem.

There doesn't appear to be any issue with access, at the moment. At the railway bridge there is a fence that has to be crossed. It goes without saying that care should be taken when crossing the fence so as not to damage it and let the farmers little sheepy's out.

If it's been raining relatively hard for over an hour and a half this river is good to go. Needless to say it also goes up and down like a yo-yo. If it's stopped raining by the time to get to the take out, you've probably missed the best of it. The best level indicator is just under the bridge. There is a spot on river left where a small cave like feature has been eroded into the sandstone bridge. Generally if the water levels are half way up this and the eddy is recirculating violently you've got it at an optimum level. If the level is approaching the top of the cave and above and there is a large cushion wave pushing against the river left arch the level is quite high. At these levels the river becomes a continuousness grade IV.

Apart from minor pinning (which decreases with the level of the water) there's very few hazards .Rescue is easily set up anywhere on the river. You're probably at a greater risk of over-exertion from the hike in than you are of anything that the river will throw at you.