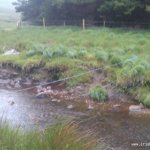 A fun grade 2 river that is runnable even into the summer months, although low in water. It is enjoyed by even the best paddlers as one of the places they have learned to paddle on. It sports some lovely play-spots at the right water levels.

Stackallen Weir
From Dublin
Take N2 northbound towards Slane. Continue north on N2 until you see a sign for Newgrange (approx. 2km south of Slane) on your right, at a staggered junction. Take the left at this junction, signposted for Navan. Continue east on this minor road for approx 3km until you reach a petrol station at crossroads. Turn right at this crossroads. Continue for 500m until you reach an old stone bridge over the river. The put in is 250m downstream of this bridge, marked by an old mill. This is just upstream of Stackallen weir.

From Navan
Take the Boyne Road from the town centre for approx 1.5km until you reach a petrol station at crossroads. Turn left and continue for 500m until you reach Dunmoe Bridge. Put in 250m downstream at Stackallen mill/weir.

Return to the N2 and continue toward Slane village. There is a rest stop on the right hand side of the road where you can park. It is also possible to park left or right of the traffic lights (however there are security concerns in these spots).

Stackallen Weir
This weir can be run on any line at regular water. There is a sluice on the river right that is a ballsy run but scout it and decide for yourself (Rescue set up is not easy). There is a wave at stack Allen at good levels (You'll be able to see ether wave from the get in).

Continue down the river, there will be a slight left turn in the river that should be run river left when beginners are present (again a wave/hole can form river right with the right water levels, not good for playing in but can be meaty at some levels. The river has moderate flow until you reach the next weir which is called the "Diagonal".

Diagonal Weir
This weir can be run river left by paddling to try and hit the wall so as to avoid the stopper along the weir, or one can hit the stopper but will need to surf it to the end of the weir (approx. 75 meters long) to where is will spit you out. Alternatively you can proceed river right to the end of the weir and drop over the side (Edge right to hit the river flow and avoid a flip. With extreme beginners may be advisable to set up rescue on a sling to pre empt a capsize).

Located about 20 meters after the diagonal weir is the get out for the canal drop at a part of the wall witch has collapsed .The drop its self is about 15 meters down from this and is caused by a broken canal gate .Safety cover is advised as the hole will hold boats and possibly swimmers at certain levels .

"S-bend"
The river continues relatively flat until the next weir which is runnable river right in high water for an easy run (with beginners) or a fast moving run on the river left which avoids the weir in an S-bend fashion . There are eddies both river left and right on the way down this for rescue if needed, the main eddy below the run is directly on the river left, from here you can practice break in's or practice your tail squirts for fun.

Continue from the eddy to the river right. Avoid the trees on the left as there's a siphon just at the stone pillars.Following a long, flat stretch, the next weir, "The big A" is visible.

Carrickdexter Weir - "The Big A"
The Big A is an "A" Weir as the name suggests. There is a bar stopper that goes almost the full way across the weir, and in high water forms a strong tow back. It is not advisable to run the bar in high water without the proper expertise and rescue set-up.The weir can also be run on either side, downstream of the bar stopper.

There is also a route river right about half way down the weir which involves a lot of white water. This route also forms a playable hole at low levels, along with another hole further down on the river right side that can be played in at medium and low levels, however these holes are shallow enough.

Slane Castle Weir
There is then a long slog until the Slane castle where there is a weir. This weir can produce a small wave on river left and a large wave river right which can be surfed the full length of the weir in high water.

Slane Village Weir - "The Animal"
The river continues on a hard slog for about 1.5 km to the weir at the bridge of Slane village. Usually it is run at the closest point of approach down a little shoot left of a man made dam.

Taking this route means also paddling over the bar stopper 20 meters below of it. The weir can be ran further down stream but here also gives a stopper at the base of the weir that hold a boat until the end of the weir.

Note: There is an electric fence to negotiate here. It's almost always on.

Make sure not to block the entrance to the houses at the get in. Some horse riders have requested not to paddle as they are passing as paddling disturbs their horses. There are anglers/fishers along the banks toward the end of the river. There has been boat theft at the get in of the river, and there have been break in's at the get out on a number of occasions also.

Flood
Water will be washing out the bank at the get in.

Low
Toward the summer months the leaves will be on the trees and and the reeds in the river will be standing up due to lack of flow. Also you will have to climb over the weirs.

Dangerous holes may form at some weirs at high water. "The Big A" (Carrickdexter Weir) is an "A" Weir as the name suggests. There is a bar stopper that goes almost the full way across the weir, and in high water forms a strong tow back. It is not advisable to run the bar in high water without the proper expertise and rescue set-up.

Dead live stock after floods; The flow of yellow liquid into the river at Slane castle around August; Some people who have contracted Weil's Disease have thought is was due to padding this river.